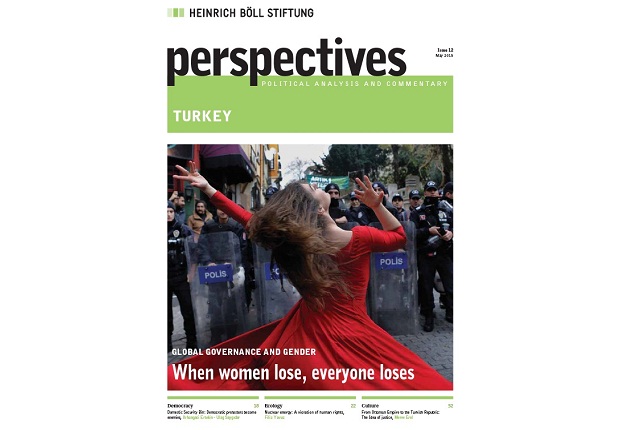 With this issue of Perspectives we want to shed some light on global governance and gender: to what extent are the decisions taken gender sensitive? Who makes the decisions? One focus will be on the UN Beijing +20 process. It was very much debated if a new declaration should be issued or not. Due to the backlash we face in many countries all around the globe, many feminists even did not want to revise the decisions taken at Beijing. Facing this backlash, Yasemin Öz discusses in her article the current necessity for an international struggle for women’s rights, resembling the one at the very beginning of the women’s movement.

When looking at the G20 process, the missing gender perspective becomes more than obvious, argues Bengi Akbulut in her article. When talking about a reduction of public finances and of privatization, women are much more affected than men. But who is aware of these very obvious arguments about gender inequality? When listening to the European Union’s debate about the debts of Greece, did anybody mention gender issues or raise concerns about the gendered implications?

A look into the regional developments from a gender perspective reveals the shocking cruelty of the so-called IS and of other radical Islamist groups in general and against women in particular. The bombardments of the international coalition might have led to a withdrawal of IS from certain areas, but until today there seems to be no strategy to force these groups to give up their attitudes against women. And those who buy women at the slave markets are not enough condemned by the international community. The impact on the role of women in the region most probably goes far beyond the territories under control of radical Islamic groups. These developments are a severe blow for democracy in the region in general.

The future of Turkey’s political system will very much depend on the result of the coming parliamentary elections in June. It is already obvious that they will occur in a very tense atmosphere: with the new law on internal security, political opposition is once more seriously disadvantaged. The upcoming months will prove if Turkey will be able to held free and fair elections with these new laws. Concerning the elections, the only positive development with a view to gender issues can be found in the quota and co-speaker-system of the pro-Kurdish party HDP. The social dynamic of this development and its impact on other political parties has an immense significance on the future representation of women in politics.

The AKP government will also be challenged with its foreign policy in the region: the 100th anniversary of the genocide against the Armenians will definitely have an impact on the public debate at the end of April 2015. From official reactions we understand that the government somehow accepts its crime against humanity but insists that this crime was accompanied by a crime committed by Armenians. For the public, the commemoration of Çanakkale, which underlined the Ottoman imperial power without any mention of the genocide at the same time was very disturbing. The ruling elite seems not yet able to cope with the past of the Ottoman Empire. This is especially significant as this government pretends to be establishing a “New Turkey” and hereby drawing a direct line to the Ottoman past; instead, it should have been of utmost importance to deal with Ottoman history from a human rights perspective and historical critical perspective. Furthermore, the flirtation of the government with radical Islamic opposition groups in Syria, Turkey’s role in the intervention in Yemen, and of course the regional developments of the Kurdish issue – all these factors will challenge the current government of Turkey. Until now, it has been difficult to trace a coherent foreign policy.

Before finishing, we would like to inform you about the changes in the Turkey Representation of Heinrich Böll Stiftung. After more than eleven years in this office, I transfer my duties as general director to Kristian Brakel. Then again we have two new colleagues who joined our team very recently: Bahar Şahin Fırat and Menekşe Kızıldere. Bahar will be responsible for Perspectives and our foreign policy program, while Menekşe will be in charge for our energy/ climate program.

Hoping that the elections in June will pass in peace and quiet and become a milestone on Turkey’s path to democratization...

Women’s rights on a global scale at Beijing+20

The Political Declaration adopted in the 59th session, reflects the endeavours of the pressure groups that consists of the Vatican and some fundamentalist Muslim and Christian governments to include conservative values in the declaration, such as promoting maternal roles for women, strengthening the heterosexual family and controlling women’s sexual and bodily rights.

From Global governance to domestic policies, they keep “missing women”

The G20 seems to lag behind in acknowledging that gender is one of the fundamental dimension to be considered. Given that its policy stance holds critical implications for gender justice, scrutinizing the G20 from a gender perspective is crucial, especially under the light of its unfolding role and importance in terms of structuring the future of world economies.

General elections and the crisis of women’s political representation

There are no female MPs in 43 out of 81 provinces. This democratic deficit can only be changed through a very radical change in the process of nomination. In this regard, the People’s Democratic Party (HDP), whose charter guarantees “at least equal representation for women in all decision- making mechanisms” can be taken as a good practice. The presence of co-chairs in party organs and local government is another exemplary practice for the equal representation of genders. This model or similar models could be adopted by other political parties.

The provision which allows the police to conduct strip searches and wiretapping without a judge’s permission is an instrument which will bolster plans to intern public “enemies” on a large scale. The legal system gives place to detention camps, and citizens turn into “enemies”.

Energy investments, especially nuclear energy investments, are not based on needs but political decisions. No one asks the populace what they think during the decision-making phase or in implementation process. Governments in Turkey know that if they did, the answer would probably be not one they would want to hear.

Tobacco: More than a plant

After the restructuring of the agricultural production in Turkey in accordance with the basin-based agriculture model, which is best documented in the “Turkey Agricultural Basin Production and Support Model,” all agricultural lands in Turkey were divided into thirty basins. Even though tobacco had been traditionally produced in twenty three basins, the Production and Support Model did not entail tobacco farming, and therefore tobacco farmers were deprived of state supports, including supports for crude petroleum and fertilizers. The only state support provided to tobacco farmers was land analysis expertise.

What is the approach of the Turkish foreign policy towards the Islamic State (IS)?

The path dependency of Turkey has increased and the alternatives have diminished. Furthermore, the foreign policy has lost its strategical quality, depth and maneuverability in the turbulence created by the ideological and domestically biased political decisions, which are compounded due to the Syrian issue. It seems that after all these interventions, Turkey has become a passive rather than an active player, although it continues to be a party to the discussions thanks to its geopolitical importance.

The Religious Culture and Morality lesson should be either transformed into a fully-fledged program of the study of religion or mechanisms of exemption should be established to defend individuals discrimination. If Turkey adopts the first option, Toledo Guiding Principles on Teaching about Religions and Beliefs in Public Schools published by the OSCE in 2007 may offer guidance.

The Evolution of the heritage from the Ottoman Empire to the Turkish Republic: The Idea of justice

There are significant similarities and continuities between the Unionists and Abdülhamid. It is true that the Unionists passed through a short liberal period and believed in the possibility of a merger of all these elements under a democratic or parliamentarian regime for the sake of the survival of the Ottoman Empire. But it did not last long. I do not mean to say that it was very likely to have happened but an alternative order was possible in 1908. Interview...

“Katharina Blum” is always on the agenda

I came to Turkey in January 2004. It was like a spring of reform back then. Then talks for accession to the EU started in 2005. This energized the society. It might have been naïve, but we thought that there would be progress in terms of democracy and that crucial steps would be taken in the next ten to 20 years.

Supporting conscientious people is a test for our conscience

The conference entitled Conscience and Responsibility in the Armenian Genocide: New Research on Survivors organized by Hrant Dink Foundation was held at Cezayir Restaurant Meeting Hall on March 14, 2014.