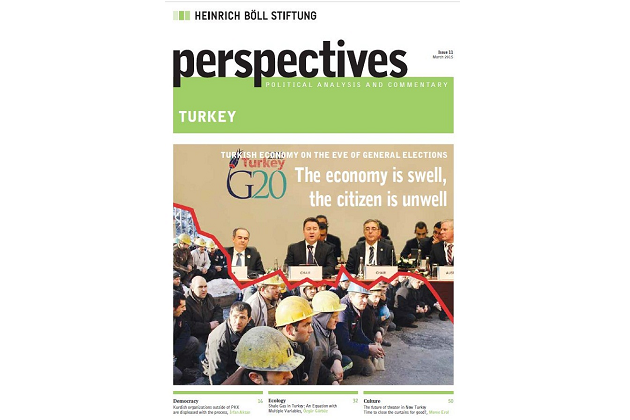 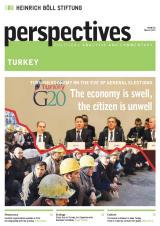 11th issue of Perspectives "Turish Economy on the Eve of General Elections" is out now. We feature a special dossier on the status of economy in Turkey, titled: The Economy is Swell, the Citizen is Unwell". You can find 2 comprehensive feature articles. As usual, we cover foreign policy, ecology and culture topics with very interesting article.

As we were preparing this issue of Perspectives we faced serious turmoil in Turkey, the neighboring countries and in Europe. Commentators at the daily evening news that normally refrain from emotional expressions even started to talk about a world in crisis, a world that is losing its anchor. They used terms like sinking ships when talking about the global order.

The culmination of IS cruelty was transferred into every single household via Internet, the killing of Charlie Hebdo journalists, and the extensive use of the social media for propaganda and inciting fear by IS, the rising racist, xenophobic tendencies especially in Germany as expressed by the demonstrations organized by PEGIDA and others… All these tendencies made many people worry about the future, living in peace and democracy.

While we were preparing this issue of Perspectives, we developed a new habit: before going to sleep we wanted to get the last information about the situation in Kobanê. In many senses Kobanê became a symbol: a symbol for the power of the Kurds, a symbol for Kurdish unity and solidarity, a symbol for the strong role of women inside the Kurdish movement, and finally a symbol for the struggle of the Kurds in Turkey against nationalist policies and their strength in the upcoming negotiations and parliamentary elections in Turkey. We do not even want to imagine what would have happened had Kobanê fallen.

Confronted with developments that seemed to shake the international world order, our original plan for the content of the Perspectives in 2015 seemed, at first glance, to have fallen apart: we planned to embed the Perspectives of 2015 in the global governance circus of this year: the anniversary of the millennium development goals, the anniversary of Beijing, the climate change negotiations in Paris and –last but not  the least– the G20-summit in Istanbul under the Turkish presidency. But, if we have a look at the facts behind the current threats to world peace, especially this year’s “global governance circle” might help us understand the dynamics underlying some of these threats. We therefore decided not to change the concept of this year’s Perspectives but to point to the complexity of global governance, to so-called double standards and discontent as well as opposition against this kind of a system of global governance.

Against this background, it is not astonishing that the buzz word in Turkey seems to be “perception”. Policy, convincing members of parliament about a law, convincing voters during elections campaigns or the people of a protest…. Everything is presented as a matter of “perception operation” or public relations work –as if the world is nothing more than a bubble of competing public relations campaigns. To have a look at the global governance circle of this year from a Turkey perspective will sharpen our understanding that it is mainly not about perception, it is about reality.

G20 and the Uncomfortable Truth: corruption

The G20, shorthand for Group 20, is considered to be one of the most significant conferences of the world leaders. Leaders of the world’s largest economies come together each year to talk about how to boost the global economy and reduce the barriers to international trade and economic development.

The global crisis in 2015 and the Turkish economy

With the bankruptcy of Lehman Brothers in the USA on 15 September 2008, it was announced that the onset of the fourth major crisis in the history of capitalism commenced. When the crisis erupted, its causes were analyzed on three different levels: structural dynamics, institutional arrangements and certain choices with respect to political economy.1 We need to simultaneously elaborate on these three levels in order to grasp both the origins and current advance of the global crisis.

Kurdish organizations outside of PKK are displeased with the process

2015: An opportunity for healing

We started the year 2015 with the civil society’s struggle for democracy and rights on the one hand, and tensions created by an increasingly authoritarian government and regional upheaval and conflict on the other. A hundred years have passed since 1915.

Centenary of the Armenian genocide and the run-up to elections

“This very much resembles a penalty kick. If I were an Armenian, I would simply go on saying the same thing. That is because the centenary is a penalty kick of sorts. We are objecting to the referee’s decision. But the penalty will be taken. The Armenian views the centenary as a penalty kick in his favor, and will try to make the best of it. In the face of accusations that undermine its very identity, Turkey will do its utmost to explain its own version of events."

Shale gas in Turkey: An Equation with multiple variables

As fossil fuel resources on earth (oil, coal and gas) are restricted in general but intensified in certain geographies, countries whose energy politics depend on these resources frequently complain about foreign-source dependency. Turkey is also dependent on foreign resources for 73% of its fossil fuels1 and its energy imports are estimated to be at the level of 56 billion dollars by the end of 2014.2

Land grabbing as a political act

A few weeks ago, we came across a promotional text on a website that features fancy photos of detached houses surrounded by trees anyone living in a big city would dream of. The text illustrates a residential compound designed for high-end consumers in Büyükçekmece district of Istanbul.

By Olcay Bingöl and Deniz Bayram

The AKP’s Foreign Policy: Rupture in continuity, continuity in rupture

The question of whether or not the foreign policy pursued during the AKP (Justice and Democracy Party) era signifies rupture has long been debated. Particularly in the aftermath of the Mavi Marmara incident,  many have sought to give an answer to the question if there has been an ‘axis shift’ in Turkish foreign policy.

MEANWHILE IN IRAQ The background of ISIL's ascent in the region

Iraq has been at the top of the list of Middle Eastern nations torn apart by violent wars for many years. In 2014, the conflict engulfed Iraqi Kurdistan, one of the region's more stable areas. The unremitting battles and conflicts in Iraq made headlines on the first day of 2014, when the police of the Shiite Maliki government organized a bloody raid to the home of the Sunnite MP Ahmed al-Alwani.

THE FUTURE OF THEATER IN NEW TURKEY Time to close the curtains for good?

According to the results of a survey unveiled in the first days of the new year, 80% of the 15,000 respondents have never been to a theatrical performance in their lives. The survey by Ipsos KGM, entitled Türkiye’yi Anlama Kılavuzu (Guide to Understanding Turkey) also reveals that 96% of the participants have never gone to the opera or ballet, 73% have never watched a concert and 56% have never been to a movie theater.

Understanding and narrating the suffering of the other / Osman Köker

Once upon a time, though not long ago, there were Armenians in Thrace and Anatolia. Who were they, how they lived and what came upon them? Osman Köker has written books, curated numerous exhibitions dealing with these questions. Here is “why” and “how” in his own words.