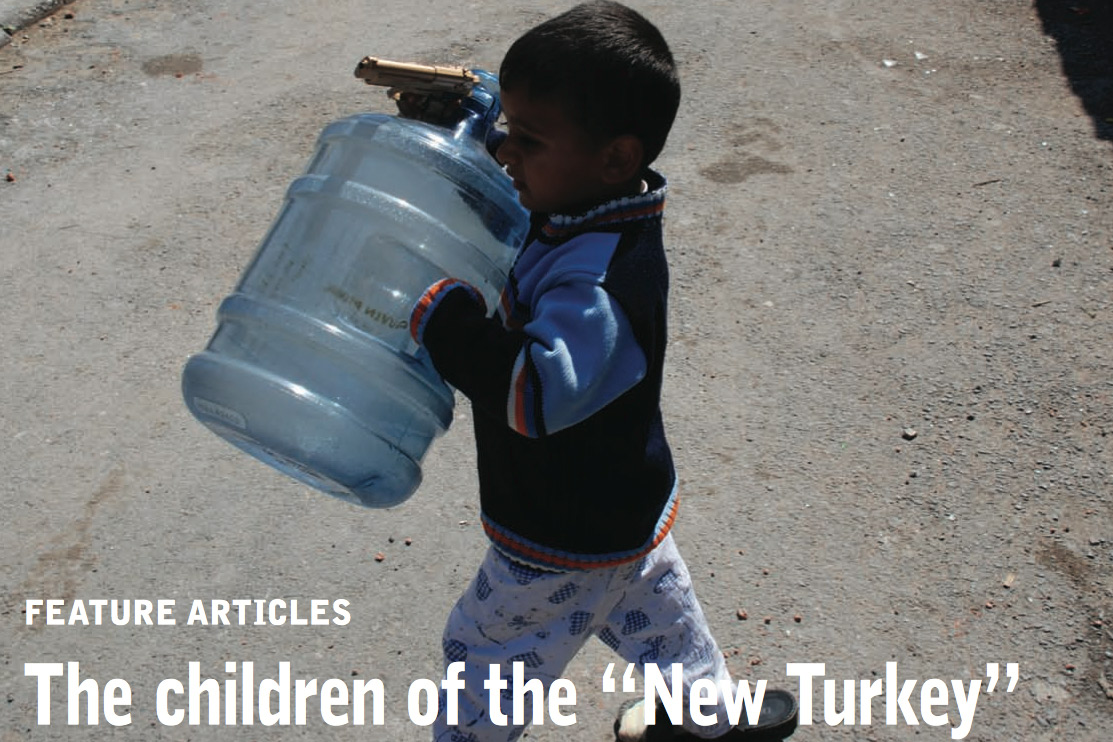 The whole of Turkey has been recently debating the “new” versus “old” Turkey ever since Prime Minister Davutoglu and the President Erdoğan have been repeatedly proclaiming a “vision of New Turkey.” Whatever the society and politics of Turkey in future will be, it will be shaped by future generations or more precisely by the current children in Turkey.

In a letter directed to the young electorate during the campaign for presidential elections, Tayyip Erdoğan very clearly stressed the important future role of the youth. He also presented his vision of the young generation: “On the path to achieving the goals of 2023 we imagine a youth that is bound to the national and ideal values, morally, active, entrepreneurial and well equipped, a youth that mixes global values with the values originating from his own history. We strongly wish our youth to stay away from violence, the exploitation of politics, from ideologies of others that are not in accordance with our way of thinking and of life, who are bound to the national and ideal values and walk as free individuals into the future. We especially emphasize that our youth should stay far away from those networks that betray their own country and nation by exploiting moral values. Our youth should not fall into these traps. I believe that the youth of Turkey will realize the darkness behind the masks. With their hearts full of faith and patriotism they will render ineffective initiatives directed against the independence of Turkey, the respect for our flag, the unity of our homeland and the harmony of our nation” (op. cit. Yeni Şafak, 6.8.2014).

Accordingly, we wanted to draw a picture of the current conditions for youth in Turkey. A government whose candidate for presidency is writing a letter to the youth, allows us expect a policy for the benefit of the youth. It allows you to believe that the conditions for the youth in this country must be extraordinarily good.

The scientific articles you will find in this Perspectives issue will shed some light on the situation of one third of the population of Turkey – youth below the age of 18. You will learn that around 20% of children are sexually abused – every third girl and every fifth boy. One in every three marriages in Turkey involves a child bride, and still more than one third of girls married off are not the first wives of their husbands. About 6% of children below the age of 18 years are working 11 hours a day and more. The future of these youngsters seems to be shaped or conditioned by traumatic experiences and severe living conditions. We yet do not know what the consequences for the political future will be. But there seems to be an incredible gap between political statements and social reality. Youth seems to be considered a strategic tool for elections, ideology production and populism. But what should we think about the motto of “New Turkey” if one of the basic pillars of this motto is grounded on a myth? 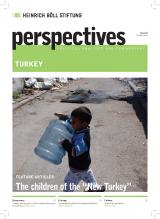 10th issue of Perspectives "Analysis and Commentary from Turkey" is out now. We feature a special dossier on the status of children in Turkey, titled: The Children of The "New Turkey". You can find 5 comprehensive feature articles on the experiences and problems of children in contemporary Turkey. As usual, we cover foreign policy, ecology and culture topics with very interesting articles.
If you would like to subscribe for the hard copy of Perspectives or request a PDF copy, please email info@tr.boell.org.
We hope you enjoy reading Perspectives and expect your feedback.
HBS Turkey Representation Team
pdf

Being a child in Turkey

The nuclear family structure praises children as the ”apple of the eye“ on the one hand, but reduces them to dolls deprived of will and action on the other.

One in every three marriages in Turkey involves a child bride, and more than one third of girls married off are not the first wives of their husbands. The marriage age for girls goes as low as 12, and Turkey is in the top 10 for child marriages worldwide.

The Dignity of the child and justice in Turkey

The juvenile justice system must be a part of a child-friendly justice and a holistic child protection system of a country as enshrined in the UN Convention on the Rights of the Child. Avoiding the deprivation of liberty, fast and fair judicial procedures, rehabilitation and restorative justice are some of the objectives in this system.

Street children are individuals who have refused to passively succumb to domestic abuse, have either opted to abandon home with immense courage or were forced to do so by their parents, and are now struggling to survive in the face of very tough conditions on the street.

On December 17, 2013, a hitherto unseen graft probe was initiated. When faced with accusations of corruption, the government did not choose to support an independent judiciary probe that would either have either prosecuted or acquitted the accused, as should be the case in a democratic society. Instead, the government passed legislative changes to bring the judiciary under its control.

The AKP’s 2023 vision includes the demand for a “unitary executive.” Nonetheless, the 2014 presidential elections might potentially create a dualistic or two-headed model vacillating between the parliamentary and presidential systems. This possibility would quickly become reality under the presidency of a leader such as Erdoğan.

Tourism as an industry of destruction

The Law for Supporting Tourism is among the main culprits behind the invasion of coasts and forests by five-star hotels from 1980s onwards. The Turkish tourism industry grew by an annual 15% versus a worldwide average of 6.8% from 1985 to 2005. The plan sets targets such as a bed capacity of 1.5 million, over 40 million tourists and an income of 50 billion dollars from foreign tourists.

The devastating effects of energy privatization

Since the year 2012 when privatization gained speed, the share of the public sector has shrunk while that of the private sector has rapidly grown in terms of both installed capacity and generation.

Turkey's dilemma and the Rojava oasis

Clearly, the most important trigger issue for Turkey had been the Kurdish question. In a Syria undergoing regime change, Turkey wanted to be on the good side of the potential new rulers from the start. Through first the Foreign Ministry , and later all its units, it started taking into its ambit all Syrian opposition, first the Muslim Brotherhood and the National Council, and then the pro-Al Qaida Al Nusra Front and Iraq Damascus Islamic State.

Turkey after the EP elections: Time for a new debate

The accession of Turkey to the EU has traditionally been an important topic for right-wing and far-right campaigns. This time, even though it did appear in the context of immigration and prejudices against Islam, it did not play a major role in the campaigns. That does not mean, though, that Turkey will be off the far-right agenda. Quite the opposite, Turkey for them is a symbol of many things they are against: migrants and Muslims.

Series were born in this “it is all for commercials” environment and were given a name reminiscent of the radio period: Soap opera. Not because they were light like soap bubbles and disappeared when they popped but because they were produced by soap companies themselves!

Humor is shaped by the space and time

Today, especially in light of the Gezi Uprising of last year, it appears that humor lives in and through social media. Magazines could not deal with television, and they could not keep up with the oppositional humor that was evolving by the minute in social media. To be fair, they are not leading this humor, they contribute to it, but they could not become its guiding force or pulling force.