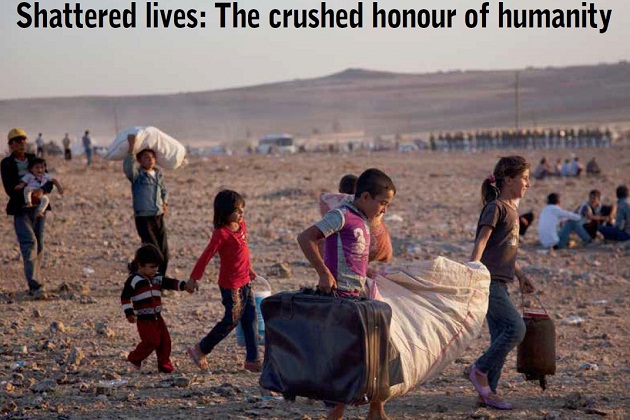 Having come to stay – A change in Turkey’s immigration policy?

With the EU and Turkey having agreed on a common action pan in December, the political will to change the course in the refugee crisis seems to have materialized in an agreement that might be beneficial for both actors. For Turkey a rapprochement with the EU comes at a time when it stands relatively isolated in the international arena, as both the relationship with Russia and the brief regional powerbroker role that Turkey had in the Middle East lie shattered. While it might be a positive development that the EU and Turkey revitalize their relationship, it seems like an anachronistic policy that does not really match the current domestic situations in both geographies. The EU is facing its biggest crisis since its creation: Greece might leave the Euro-zone and through that start a motion that might shatter the common currency; the UK might hold a referendum that would mean leaving the EU altogether; right-wing xenophobic parties are on the rise and weaken the union from within and the refugee crisis has brought the level of disagreement between EU members into the limelight. Not only is it unclear if the EU is in any position to admit new members even in the medium term, it is also unclear if a Turkey which leads a war in the south-east, limits democratic rights of the population and cracks down on oppositional media is really interested in undergoing the EU’s scrutiny.

In any case, we should not forget that the deal forged between the EU and Turkey might have been made on the backs of the refugee population in Turkey. Reports from human rights organizations on detention and push-backs of refugees captured by Turkish authorities seem to confirm that. The EU, eager to have Turkey limit the number of refugees who reach the Greek shore, is willing to pay three billion euro, but is very hesitant to specify what will happen with the refugees caught while crossing the Aegean sea. Imprisoning them or pushing them back to Syria is illegal under international law. It remains to be seen, if the EU is willing to accept such practices, just to be free of further refugees reaching its own borders.

In the end, fleeing to the EU’s shores will always be more attractive for refugees than staying in Turkey, where even those from Iraq and Syria who have a legal status see often relatively little chance to establish a future perspective for them and their families. For this to happen, Turkey will have to invest heavily into a new integration policy. This is not only a challenge financially and politically, it will also be a challenge to the societal narrative that is based on neglecting diversity even within the current Turkish society.

Knowing that the refugee crisis will continue to be on top of the Turkish agenda not only in terms of Turkey-EU relations, but also with regard to the country’s domestic and regional policies, we gave wide coverage to the issue in this Alternatif. Göksun Yazıcı, Ezgi Koman and Kemal Vural Tarlan have made valuable contributions in illustrating the current situation with their analyses on different aspects of the refugee crisis. Jens Siegert’s article elaborates on the recent tension between Russia and Turkey following the downing of a Russian SU-24 bomber on the Turkish-Syrian border by a Turkish warplane within a broader historical and political context. In this issue, you will also read an interview with Bekir Ağırdır, General Manager of KONDA, about the November election with a special emphasis on the “failure” of pre-election polls, and the political implications of the unexpected election results. The results obviously will remain on the agenda in the coming months concerning first and foremost the fate of the peace process. In the hope of having prepared an interesting and insightful issue of Alternatif, we like to wish all our readers a happy and productive new year.

On behalf of the Alternatif team, 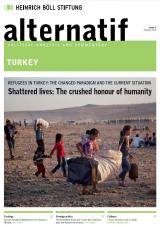 The second issue of Alternatif is out. Knowing that the refugee crisis will continue to be on top of the Turkish agenda, we gave it wide coverage: Feature articles seek answers to the situation in Turkey with a special focus on the current paradigm shift following the EU-Turkey summit on refugees in December 2015. From an alternetif perspective, we tried to look to the foreign policy agenda of the country with Jens Siegert's article on the recent tension between Russia and Turkey, and to domestic politics alike through the interview with Bekir Ağırdır about the November 1 election results and the "surreal state of mind" of the Turkish society. On the culture pages, we hosted Emin Alper and his recent film Abluka (Fenzy) which portrays the "bitter irony of reality". All articles can be reached here: ....
In the hope of having prepared an interesting and insightful issue of Alternatif, we like to wish all our readers a happy and productive new year.
pdf 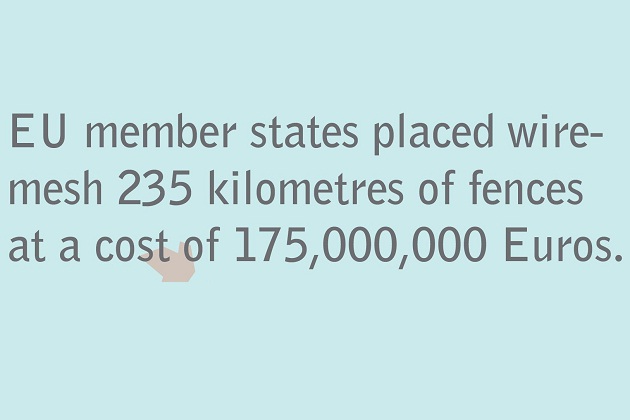 The Shift of Turkey’s refugee paradigm: What next?

Turkey’s paradigm concerning Syrian refugees has changed completely in as short as six weeks. Let us begin with a brief summary of the latest events which will be detailed further below.

Syrian Refugee Children and the Barriers Against the Right to Education

Syrian families are sometimes required to present documents, which is often not possible, as they do not have any proof of residence, rental contract or utility bill, documents which can all be taken from the neighborhood directorate (muhtarlık). Such difficulties pose serious obstacles in enrolling children into schools.

The Dom of Syria: The “other” refugees

I believe that the current conditions of globalization require us to debate the rights of individuals from different ethnic and cultural backgrounds, that is, the rights of the “others.” I will draw on Kant’s essay entitled “Perpetual Peace” to strengthen my argument. Today, as we seem to stand on the verge of global war, the current conditions of globalization correspond to a reality which spans from the “European Constitution” to the increased blurriness of the century-old borders in the Middle East. This reality also points to humanity’s progress towards “days of perpetual peace.”

“A Surreal State of Mind”

The AKP (Justice and Development Party) managed to overcome its defeat in the June 7 elections by attaining one of the highest voting rates in its history in the November 1 elections. We talked to Bekir Ağırdır from the KONDA research and consultancy company about the election results that led many researchers to throw in the towel.

It is not a hard business for a politician to put up new carpets under which things can be swept. In fact, one of the other oldest hoaxes of the business of politics is to fabricate cover-ups with all shapes and size for all issues and to do this without even caring whether all these contradict each other or not.This is what has recently happened in the case of İğneada. Or should we say the Akkuyu question?

It is estimated that there are 3.4 billion hectares of pasture areas all over the world. Twelve percent of these areas are located in China, 11% in Australia, 7 % in the USA, and 6% in Brasil. Turkey is ranked as 46th among the countries having the largest pasture areas in the world with 14,6 million hectares.1

Tension between Russia and Turkey Over-ambitious goals and obsessive persistence

Relations between Russia and Turkey had been very positive until November 26, 2015. Despite being a member of the NATO, which is synonymous with the devil in Russia, Turkey had started to be perceived as a part of the same anti-Western front under the rule of Erdoğan, who had previously served first as prime minister and is currently its president.

Frenzy: The bitter irony of reality

Considered to be one of the best films of 2015, Abluka (Frenzy) had its world premiere at the 72th Venice Film Festival and was deemed worthy of the Arca Cinemagiovani prize. Frenzy starts with the story of Kadir, who is released on probation after twenty years in prison. In return for his release, Kadir starts to work as a snitch for the state in slums inhabited by political dissidents, while making a living as a garbage collector... Let us lend an ear to the director Emin Alper on his film...

Being and a continual becoming

A Kurdish Alevi village in Anatolia. In a snowy February when even peoples’ hands and feet are frozen as hard as rock, a women, tired out from continually giving birth to children, had horrific labor pain and grappled with death for days while bearing her eleventh child. A dark-skinned baby girl thus came to see the light of the day.

On the News from HBSD pages, you'll find information on the Sustainable Life Film Festival, the event with journalist Jürgen Gottschlich on his book on Germany's role in the Armenian genocide, and our participation in the COP 21 Summit in Paris.