As the deadline for the pre-tender for a coal-fired thermal power plant in Eskişehir is approaching, public resistance is rising and has become the most artistic form of protest Turkey has seen in a long time.

As the deadline for the pre-tender for a coal-fired thermal power plant in Eskişehir is approaching, public resistance is rising and has become the most artistic form of protest Turkey has seen in a long time.

In order to increase the share of local coal within electricity production, the Ministry of Energy and Natural Resources has decided to build a thermal plant in Alpu which is a fertile plain comprising a huge amount of farm land only 32 km away from the city centre of Eskişehir. The Alpu plain is one among 141 plains that have been declared to be protected agricultural sites. In addition to its abundant wheat production, the place is also well-known for sepiolite, a characteristic industrial mineral which is mostly used in pipe making and ornamental items.

The plant is expected to be built on an area of 1.125 hectare, with a power capacity of 1080 MW. Annually, 6.3 million tons coal will be burnt, which will create 1.6 million tons of bottom ash. Together with 350 thousand tons of gypsum, the total amount of waste that will be produced in the plant will be around 2 million tons. The head of the Chamber of Environmental Engineers, Baran Bozoğlu who evaluated the Alpu plan, declared that the plant would create 8 billion kg of carbon dioxide emission annually, and an amount of ash, that would be enough to cover 450 football fields. Referring to the WHO’s qualification standards for clean air, Bozoğlu said that currently in Eskişehir the PM10 values, which point to the amount of inhalable particles, with diameters that are generally 10 micrometers or smaller, are exceeded only 21 days during a year; an indicator for why Eskişehir is ranking among the top three livable Turkish cities. The WHO says an amount of 35 days should not be exceeded, as otherwise health issues such an increased cancer rate might occur.  This number rises up to 242 days in Kütahya and 198 in Soma, two neighboring towns where thermal plants do exist.

Indeed Eskişehir is trying to stand against the plant while displaying the most creative examples of civil resistance, involving all possible segments of the society, both in the city centre and the rural areas. For months, the Eskişehir municipality, university students, NGO representatives and farmers have been demonstrating, making use of a wide array of activities. Various billboards and posters, which depict the Porsuk stream that runs through the centre of Eskişehir and reads “No to thermal plants” has been shared on social media under the hashtag #Eskişehirkıymetlidir (#Eskişehirisprecious). Young inhabitants of the town, mostly university students, have put gas masks on the most famous statues of the city ('The donkey that cracks sunflower seeds', 'The chatting women' and 'The man who wants to return to the village”) and published them on social media, saying that the thermal plant’s emissions might even harm the statues. Another group of youngsters performed a rap-song with a striking video-clip, which they shared with the hashtag #direnecekbueskisehir (#thiseskişehirwillresist)

Earlier this month, city-dwellers and farmers came together at the Gündüzler village for the first “Winter Festival”. Their convention was yet another opportunity to display their disapproval of the plant to be built. A convoy of hundreds of tractors that travelled through nearby villages carried Turkish flags and banners with slogans such as “The soil is our honor”, “We don’t want the thermal plant”, “Hands off my air, water, soil”. During the festival, participants also contributed to the anti-plant petition initiated by the Eskişehir Platform for Environment and Life.

While the whole city is on the rise against the plant, the Privatization Administration of the Republic of Turkey is going to hold the first tender for its construction on January 26th. The applicant that proposes the lowest electricity marketing price per unit will be authorized to build a plant that will be run with coal. According to the database “Europe Beyond Coal”, there are currently about 25 operating coal-fired plants in Turkey, 4 are under construction and more are being announced to be built with the justification to make use of local coal resources. However, reports about the country’s coal import illustrate just the opposite: parallel to the increase in the number of thermal plants, the amount of imported coal has risen. The coal import figures of 2014 are 6 times higher than the numbers in 1990. Out of 9 GW installed power capacity that has been added since 2002, 6 GW belong to thermal plants that operate with imported coal. 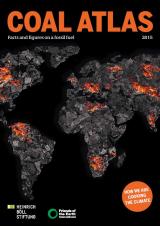 Coal Atlas: Facts and figures on a fossil fuel

Our Coal Atlas contains the latest facts and figures on the use of coal and its environmental and social consequences. With more than 60 detailed graphics, the atlas illustrates the coal industry’s impact on nature, health, labour, human rights and politics.

Energy dreams in the days of power cuts

The biggest city of Turkey, and its economic heartland, Istanbul has ended the year 2016 with power cuts over several days.

Nationalism and Nuclear Energy in the International Political Discourse

As the debate about nuclear energy is framed alongside a discourse of “rights of nations”, I would propose to shift the notion in the debate towards the “interest of societies and people”. This might open ways to end the impasse in the discussion and to overcome the mental deadlock.